July 25, 1914: Cornerstone of the Academy building (Administration Building) was blessed by Rev. Edward J. Mealey. The building was designed by Maginnis & Walsh and constructed by MD Mealey & Co., both of Boston. (view material on the event)

c. 1915-1916: Boston Academy of Notre Dame opened in its new location on the Fenway, moving from its former location on Berkeley St. (view material on the event)

September 19, 1919: Emmanuel College opened with 29 students as a day college. It was the first women’s Catholic college in New England.

View materials from the 1910s.

April 14, 1921: Emmanuel College received a charter  from the Massachusetts Legislature giving the College the authority to grant degrees. The bill became law  after it was signed by Governor Channing H. Cox. (view the Emmanuel College charter)

1923: The College was accredited by National Catholic Education Association. 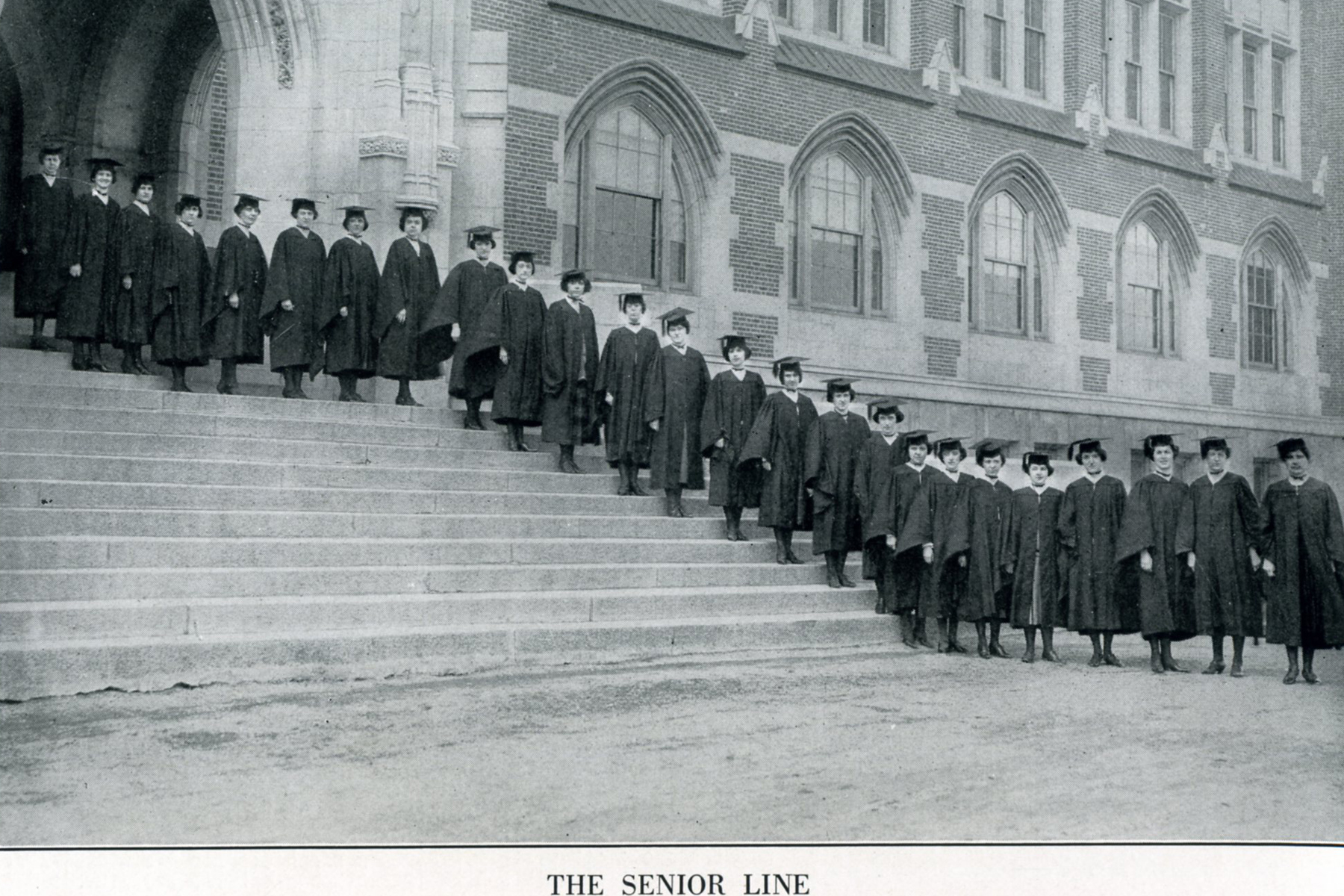 June 8, 1923: The Alumnae Association was founded with the guidance of Sr. Helen Madeline Ingraham, SND.

View materials from the 1920s.

October 1927: The Board of Trustees approves the construction of basketball and tennis courts. 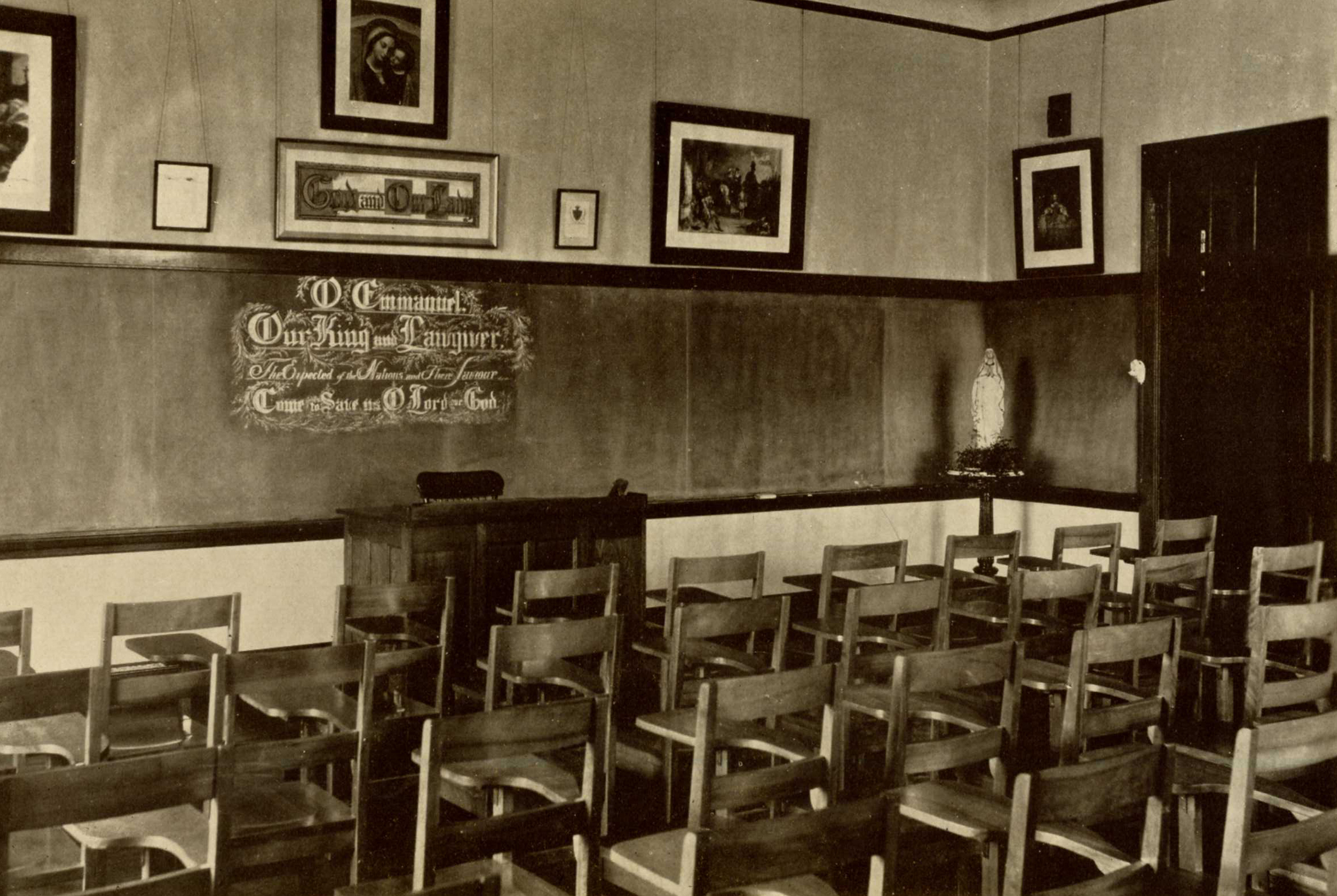 View materials from the 1920s.

1932: Emmanuel College is granted accreditation from the New England Association of Secondary Schools and Colleges.

1933: Emmanuel College purchased land expanding the original campus from Brookline Ave., to Ave. Louis Pasteur on the Fenway. The original eleven acre site was enlarged by 16,150 sq. ft. In addition the College added a paved road and renovated the heating system of the one existing building.

1935: A Placement Bureau was established  to provide alumnae guidance in entering the professional working world. The Bureau was a forerunner to the Office of Counseling and Career Services.

1939: The College instituted a formal administrative structure to aid Sr. Helen Madeline Ingraham in the administration of the College.

View materials from the 1930s.

1941-1942: The International Relations Club was organized.

1941-1945: The Tabernacle Society, at Emmanuel College, under the leadership of Sr. Claire Julie, SND created Mass kits for chaplains in World War II European and Pacific Theaters. The kits, according to Sr. Julie contained “everything but the altar boy.”

April 22, 1944: William Henry Cardinal O’Connell died and was replaced as Archbishop of Boston by Richard J. Cushing, in the year of Emmanuel College’s silver jubilee. 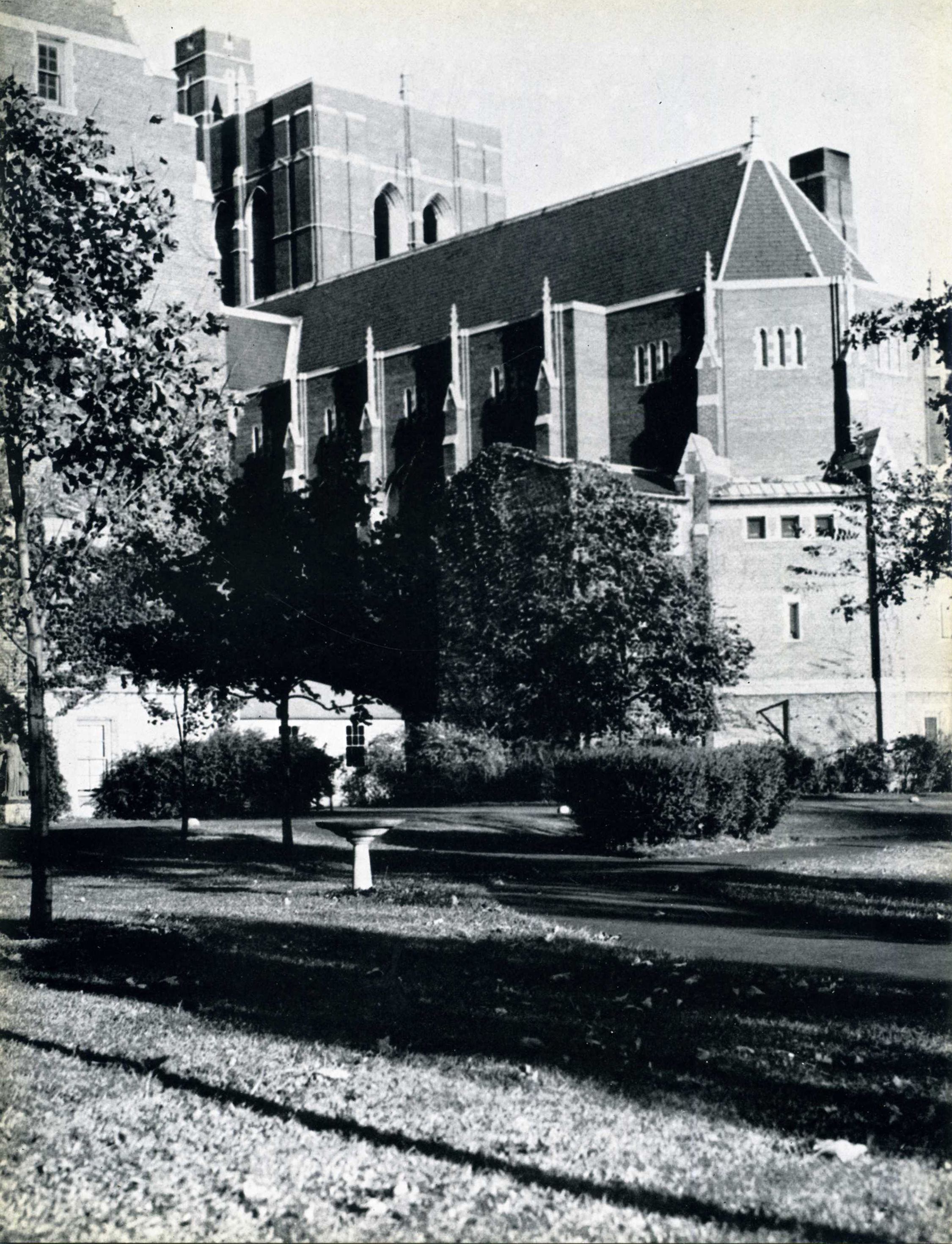 1944: Archbishop Cushing was named chair of the College Board of Trustees and the Rev. Sr. Augusta of the Sacred Heart, SND, Provincial for Waltham Province for the Sisters of Notre Dame de Namur, was appointed vice-chair. This marked an end to the period when the Board of Trustees was comprised solely of members of the Congregation.

June 4, 1945: Mary McNally purchase the Horace B. Shepard Property along Ave. Louis Pasteur and transferred it to the College on August 22, 1945. This 51,101 sq. ft. site was used for the construction of Alumnae Hall.

October 1948: The Focus, a student newspaper, was established with a seven (7) person editorial board and Sr. Berchmans Louise of the English Dept. as the faculty advisor.

February 19, 1949: “The Saint Among the Shadows” following the life of Sr. Julie Billiart during the French Revolution, was presented on the radio station WEEI. It was written by Emmanuel Seniors Jean Edwards and Catherine Reilly at the request of Rev. Timothy O’Leary, Diocesan Assistant Superintendent of Schools.

April 24, 1949: The cornerstone was laid for Alumnae Hall, built for the purpose of expanding science facilities and funded by contributions from alumnae and Cardinal Cushing. The building was the first building constructed on campus since the opening of the Administration Building and was designed by Charles Maginnis.

View materials from the 1940s.

c. 1952: The Art Department was established. 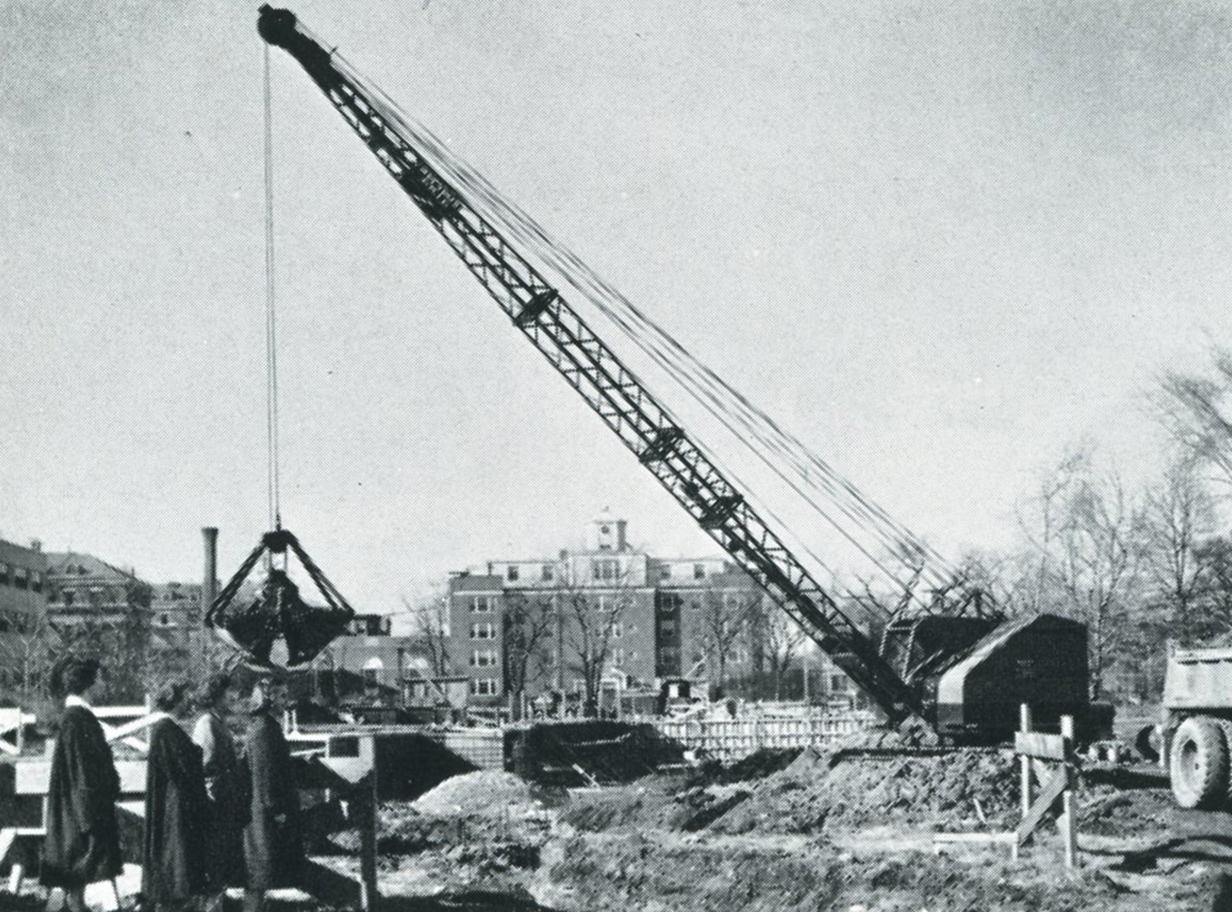 September 26, 1955: Dedication of Marian Hall as a multipurpose building that contained a cafeteria, gymnasium/auditorium and residence hall.

February 16, 1956: Senator John F. Kennedy lectured on the influences on elected officials and then read from his book, Profiles in Courage.

1957: St. James Hall was built as an extension to the west end of the Administration Building to accommodate resident nuns. (view material on the event)

View materials from the 1950s.

1962: A Coffee Shop/Campus Shop was opened on Campus.

c. 1963-1965: Emmanuel College purchased apartment buildings on the corner of Brookline Avenue and The Fenway for the construction of St. Joseph’s Hall.

Fall 1963-Spring 1964: Dorothy Day gives a talk on “Ethics for Peace.” The talk was most likely held in the Administration Building Auditorium of Emmanuel College.

1964: The undergraduate Economics Department and the Graduate School  were established.

October 18, 1967: The first lay members of Emmanuel College Board of Trustees, Henry W. 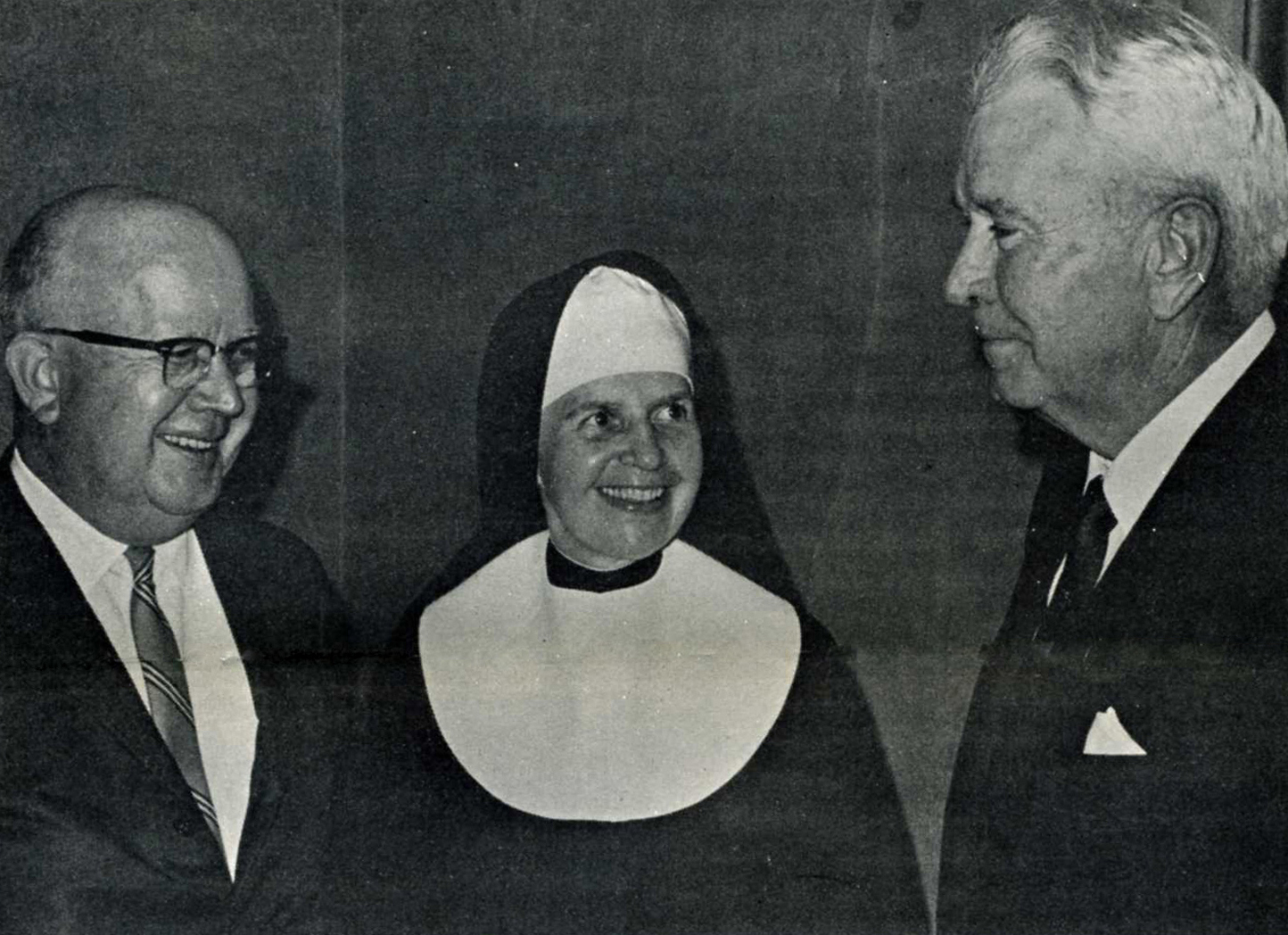 May 1969: Women’s Liberation Conference held in Marian Hall on such issues as women and their bodies,women and the law, self-defense and witchcraft. Authors of the landmark publication, Our Bodies, Ourselves met at the conference.

November 22, 1969: Sr. Marie Barry, SND, was inaugurated as the tenth President of the College.

View materials from the 1960s.

c. 1972: Area men's Catholic Colleges began to admit women. It was at this point that enrollments began to drop and  Emmanuel opened its dormitories to area hospitals and schools.

December 9, 1972: The Board of Trustees formally approved a Students’ Bill of Rights.

November 20, 1977: Emmanuel College sponsors a ‘teach-in’ that was organized by Sr. Rosaria Salerno in support of the Anti-nuclear movement.

Winter Break 1978-1979: Sr. Janet Eisner, SND, called a the Wenham Conference to plan the future of Emmanuel with faculty, students and administrators.

September 15, 1979: Sr. Janet Eisner, SND, was inaugurated the twelth President of the College (view material on the event).

View materials from the 1970s. 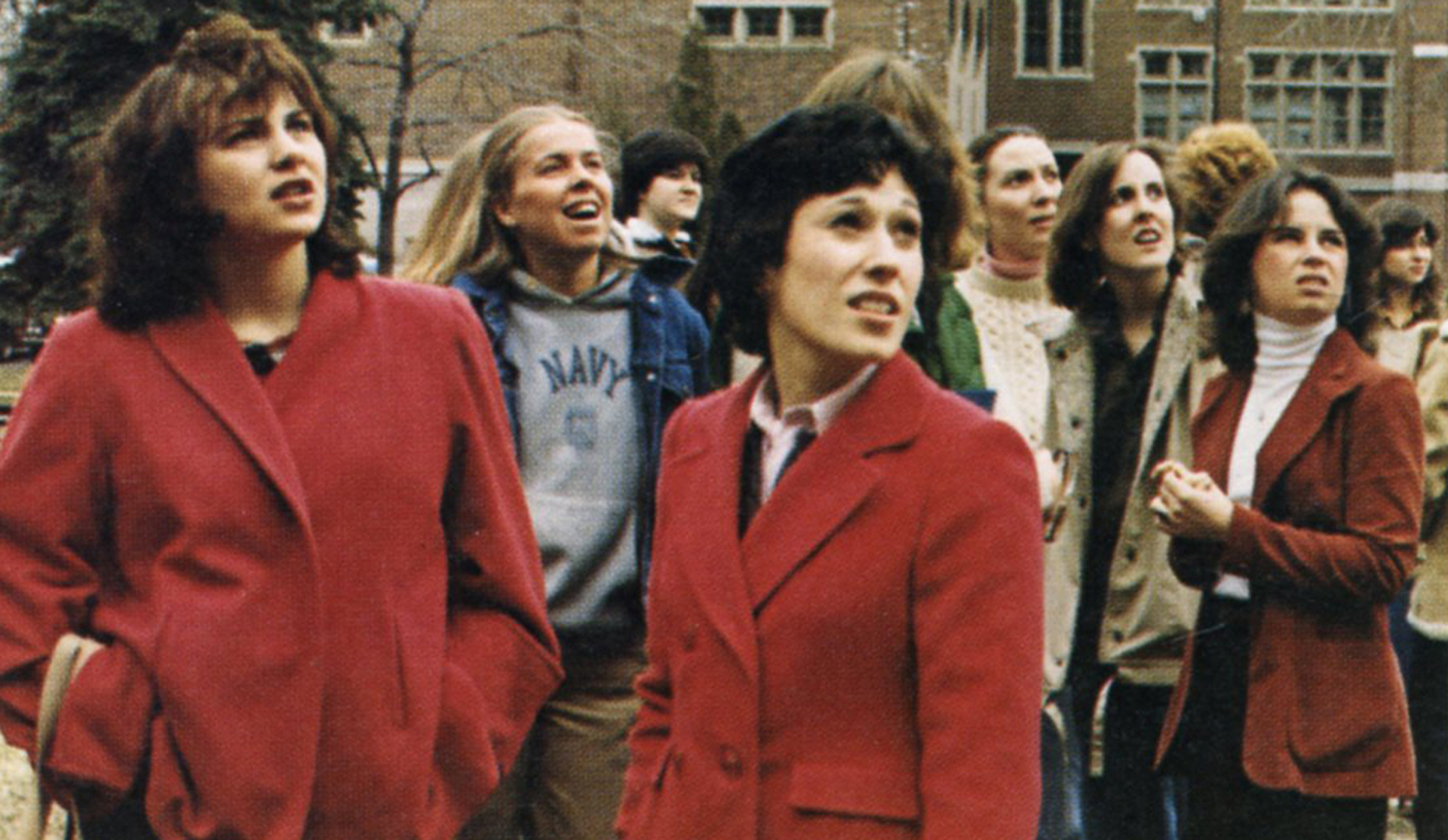 February 3, 1984: A Democratic Presidential Primary Forum on Women’s Issues was sponsored and by WBZ and Emmanuel and hosted by the College. (view material on the event)

Fall 1984: Larry Bird filmed a commercial on the Emmanuel Campus.

April 27, 1985: A Higher Education and Hispanic Women Conference was  held on campus.

October 25, 1987: A renovated Marian Hall was dedication as a Science Center.

View materials from the 1980s.

February 2, 1993: Celebration of the first Founders Day that included a panel discussion and Vespers prayer service 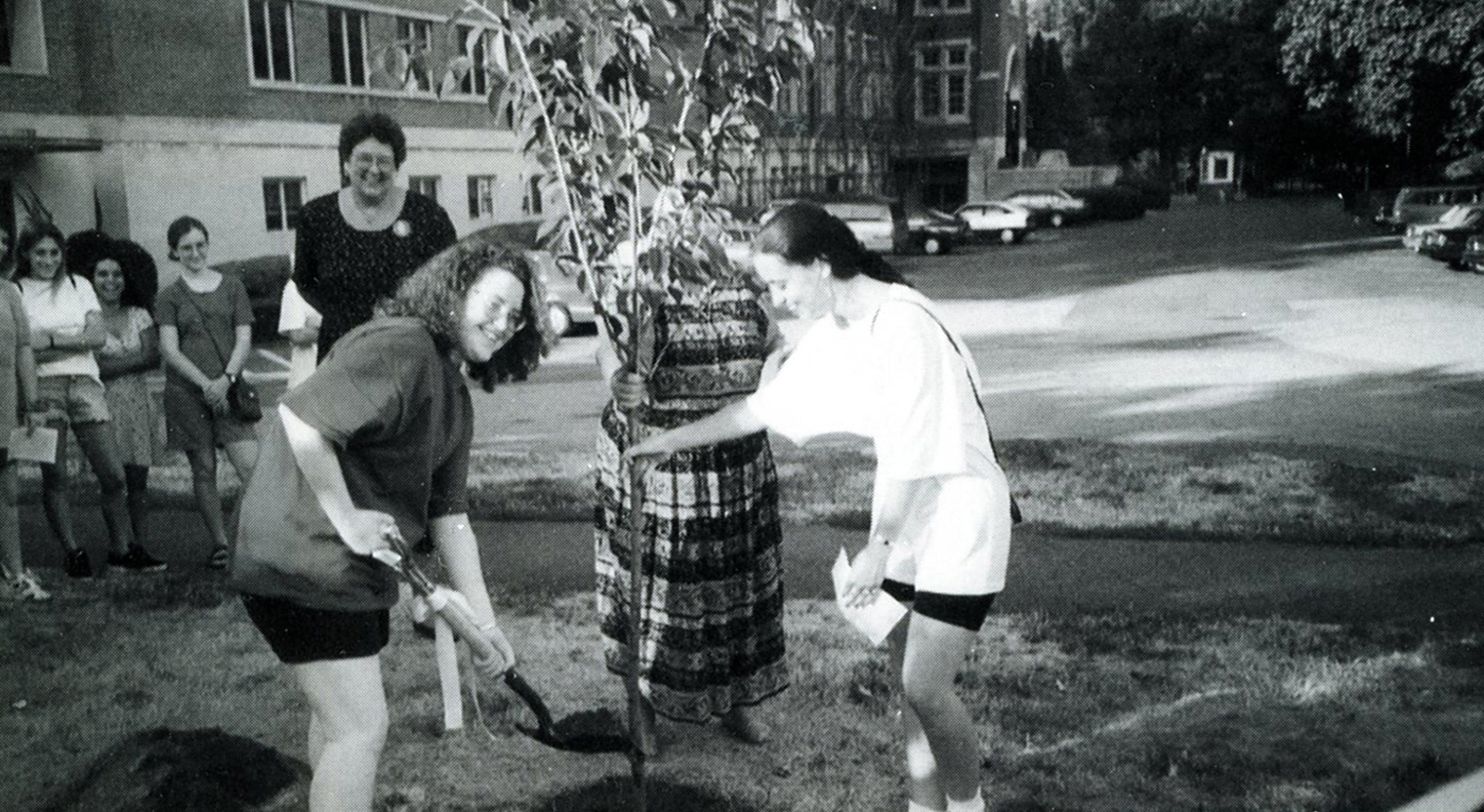 1996: The Colleges of the Fenway, a consortium of six area colleges,  was initiated by Sr. Janet Eisner, SND.

1998: Renovation of College Chapel on the first floor of the Administration Building was completed.

View materials from the 1990s.

2001: Merck Laboratories leased a parcel of the Emmanuel College campus for a Research Laboratories Building.

October 1, 2001: Ground was broken for the Merck Research Laboratories Building

September 13, 2002: Emmanuel College buys Julie Hall back from Beth Israel Hospital to allow for expansion of the resident student population.

2009: The College partnered with the City of Boston to restore Roberto Clemente Field.

2009: The College initiated a four-phase renovation of the landmark 1914 Administration Building.

View materials from the 2000s.

2012: Emmanuel College purchased the Notre Dame Campus. It was the former home of the Society of St. Margaret's Convent.

Spring 2012: OUTspoken, a LGBTQ organization, is recognized by the Student Government Association.

September 2016:Economics major, available through the Department of Business and Economics, reinstated at Emmanuel College.

View materials from the 2010s. 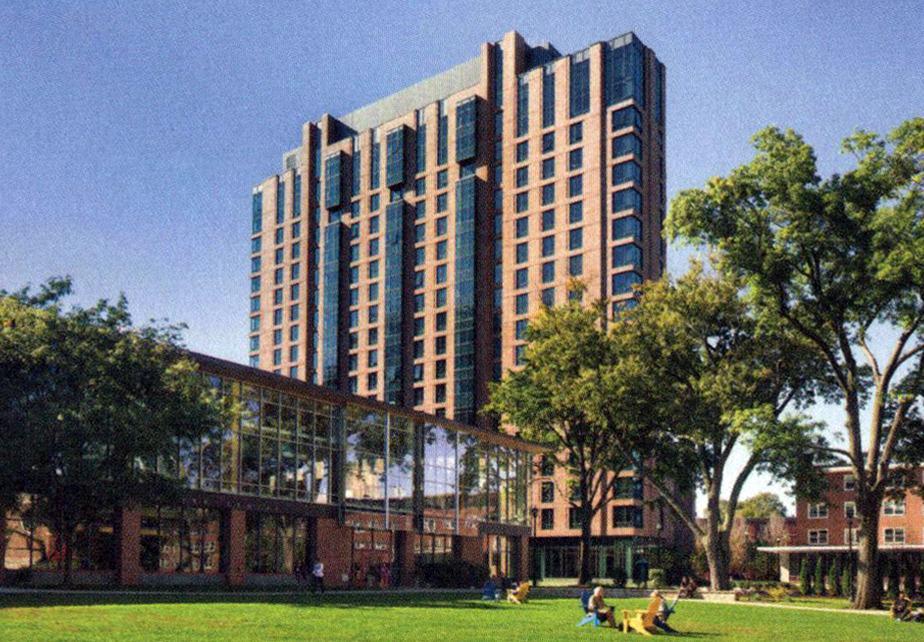